A few weeks ago as Adam and I were beginning to contemplate my return to work and the end of my maternity leave, Adam asked me what I thought about doing another travel nursing assignment. He’s brought this up every few weeks or so since he got back from Arizona last year, so I decided it was time to really talk about it and weigh out the pros and cons. We completed a decisional balance worksheet (a therapy tool I use that looks at the pros/cons of making a change versus staying the same), and we discovered that most of the cons for making the change would be resolved in a couple months of traveling while the pros were significant and longer lasting. Our conclusion about the “stay the same” part was really nothing would change – Charleigh would go to daycare, I’d go back to work, Adam’s job stays the same. We realized that at some point during this conversation we stopped talking in “ifs” and started saying “will.”

The next day Adam reached out to a couple travel nursing recruiters, who quickly responded with multiple opportunities. We ended up settling on Porter Adventist Hospital in Denver. Next came the realization that we’d be moving in about 3 weeks, one of which we were out of the country for. We gave notice at our jobs, packed the essentials, installed a hitch on the minivan, threw away or donated a bunch of stuff we didn’t really need, found an apartment, figured out all kinds of insurance, and said goodbye to our friends and families.

Before long, June 13th arrived. This was not only the day we started our journey west, but was also Charleigh’s 2 month birthday. Adam’s mom came by our house that morning to say one last goodbye and to bring us a roof storage bag to fit the last of our stuff in. We loaded up Charleigh and the pups and hit the road.

Our destination for Day One was Holly Springs, Mississippi, where my grandmother and Aunt Beth live. Our first stop along the way was supposed to be Atlanta for lunch and a bike shop pit stop, but Charleigh had other plans. We made it to the Batesburg exit before Charleigh needed to nurse and get a diaper change. After that quick stop, we drove on to ATL. Adam needed something done to the Domane so we stopped at a bike shop in Atlanta to try to get it fixed. Since it was about time for us to eat lunch, we hit up this hole-in-the-wall grocery store/restaurant/bar that the guy at the bike shop told Adam about. Then we hit the road again.

Things went pretty smooth until we hit Birmingham. Apparently, this one area of Birmingham’s interstates has been under construction for the last thirty-odd years, according to my dad. Because of this nonsense, Google Maps told me to take an exit about a quarter mile after I had passed it. To try to get back on track, it told me to take Exit 124B on the right. Too bad that exit was actually 124C and I took B, which was on the left. Thankfully traffic was light despite us hitting Birmingham right at five o’clock, and we finally made it out of that ridiculous town.

From Birmingham, we drove on to Tupelo, MS, where we stopped for dinner and for Adam to run. That was a hot mess. We stopped at a pizza place with an outdoor seating area, where I sat with Charleigh and the dogs while Adam went to run. What we didn’t realize until too late was the outdoor seating area was also the smoking area and Tupelo apparently has a lot of smokers. You might not know this, but being around cigarette smoke makes me feel sick. Sometimes it makes me throw up; other times it burns my throat and eyes. So I’m sitting on this patio trying to eat while wrangling a baby and two dogs and trying not to choke while a dozen people smoke about 15 feet away. Humidity is so high that everything is wet even though it hasn’t rained. And Hercules chewed through his leash – not once – but twice. So much for that fancy retractable leash. By the time Adam got back from his hour-long run, I was on the verge of tears. He got his salad to go, and I loaded up dogs and baby so we could keep driving.

At least the pizza was good

So glad to be leaving there

We finally make it to Grandma’s house, where she and my Aunt Beth are waiting up for us. Charleigh got to play with them both before we headed to bed. I went to bed hoping for a decent night of sleep. I did not get what I wanted. Charleigh was fussy and crying most of the night. It was hot and humid. The dogs kept trying to get in the bed. Despite going to bed around 11:00 for Adam and a little after midnight for me, we gave up on sleeping around 6:30 AM. Grandma made us angel biscuits and scrambled eggs for breakfast, and we hit the road again.

After a night of so little sleep, I expected Charleigh to sleep hard during the day, allowing us to make good time on our longest travel day. Charleigh had other plans. She needed to be nursed or changed almost every hour. There was a lot of stopping on the side of the highway to nurse a crying baby. Many diapers were changed in the van. We stopped for lunch in a tiny town in Missouri with the intention of going to a nice little cafe. We discovered that cafe was closed. Tried to go to a different one; also closed. Ended up at Almost Famous Barbecue, where Adam got the AF burger and I got some chicken fingers and fries. The closest thing to vegetables on the menu was cole slaw, which I ordered; it was so gross I couldn’t eat it. At least the chicken fingers were pretty good. 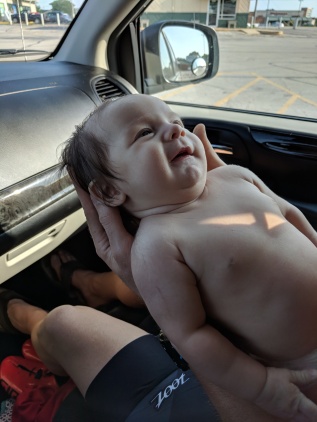 Shortly after crossing the state line into Kansas, I dropped Adam off at a lovely park, from which he rode his bike to our destination for that night. After dropping him off and walking the dogs a bit, Charleigh and I continued on to the Airbnb in Topeka.

We arrived to discover that although the space was listed as non-smoking and one of the only “house rules” was no smoking, the owner smokes heavily on the main floor of the house (Airbnb space was in the basement). Despite the air filter running in the bedroom in the basement, my throat was burning and I didn’t feel good about keeping Charleigh there overnight. When Adam arrived about half an hour later, we tried to decide if we would stay or not. As we had not had dinner yet and it was almost 9:00 pm, Adam went to a nearby grocery store and got us the biggest sub sandwich I’ve ever seen (aside from those six-foot subs Quiznos used to have). He also bought me a rose because he’s a sweetheart and realized I was having a hard time. By then I was positive I could not sleep in that room, so we loaded back up and found a hotel for the night.

The hotel was great. The clerk working the desk moved his car so we could park the van in a spot where he could watch the bikes and roof bag for us. The entire hotel was smoke-free. The bed was super comfy and the pups even got their own bed. We couldn’t really figure out the TV, so it would only play one channel that was airing some old movie about these gold digger ladies that looked like it was made in the ’40s. The next morning, Adam got up to swim and I slept a little longer. We ate breakfast at the hotel before continuing our trek across the country.

Day three we drove clear across Kansas. Gas mileage was terrible due to strong winds across the prairies (about 30 mph sustained winds) and the slow climb towards Colorado, which made progress a little slower than we had hoped. Finally, we crossed the state line into Colorado! This was the only border where people were stopped to take pictures with the state sign. Although it says, “Welcome to Colorful Colorado,” it took a pretty strong filter to make that picture look like it had any color in it.

One thing we noticed as we drove across Kansas and Colorado was that the sky was so bright it was almost white most of the time. This is really exhausting on your eyes, so if any of you wants to drive out this way, I strongly suggest sunglasses! Since I’ve been out of contacts for almost a year, that wasn’t an option for me.

Charleigh slept pretty well as we made our way on Day 3, which was quite a relief after how rough Day 2 was. This was important because we needed to be at the apartment by 6:00 mountain time in order to get our keys. Our initial goal was 4:00, but we didn’t quite make that. Around 5:00 we arrived in Denver, hitting surprisingly light five o’clock traffic. Shortly after 5, we made it to our new apartment building, got our keys, swabbed the dogs’ cheeks for the DNA registry thing, and finally got to see our new home!

Since we arrived, I bought us a really nice chair for $12.50 and a couch for $0.99 from local Goodwills (Thanks Tomek for helping us get furniture moved in!!). We got the crib my dad built for Charleigh moved in and set up. Adam started his travel assignment. We celebrated Father’s Day with a trip to Cherry Creek State Park’s Dog Off Leash Area. So far we all really like Denver, and we can’t wait to see what else this city has in store for us! 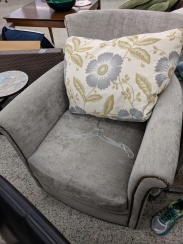 One thought on “Colorado Bound”