Some people would say that doing 2 Half Iron distance races on consecutive weekends is not smart. Those people would not be entirely wrong. Regardless, this has been my 3rd time doing this in the past year, and by far the most successful. The Toughman SC Half was my last race for the SC Triathlon Series and was taking place in Greenwood, SC. Specifically, it started in Lake Greenwood with the swim, biked to Uptown Greenwood, and finished with a double out and back run on the Heritage Trail. I had actually competed in a Toughman race in Arizona earlier this year and placed 2nd to Pedro Gomes after fading in the last couple miles of the run. So I was eager to have another shot at being a Toughman Winner!

My coach and I had decided to go with a more conservative and steady approach to this race as opposed to the more spiky effort in Augusta. Despite some fatigue from the previous week, I was confident that I should be able to put out a solid effort on the day. It was an early morning to head out to Greenwood to set everything up required for the two transition race. Everything went relatively smoothly and soon enough we were only a few minutes from the start. There were maybe a dozen Open athletes in the first starting wave and I lined up far to the left for the double loop swim course.

The cannon went off and I got to a good start taking the lead early. At the first turn, I noticed that David Hall was only a few body lengths back and holding steady. During the rest of the first loop he made a few attempts to get into my draft, but my competitive nature went off and I put in a short surge and moved to a different line to prevent this. At the end of the first loop, I did a couple fancy backstroke turns which apparently impressed a couple of the spectators watching from the ledge above.

On the next stretch, David was coming just to my left so I decided to go ahead and sit in his draft for a bit and save some energy. In the last few hundred meters, my competitiveness got to me again and I pulled off the side and put in a harder effort to come out of the water in first place!

The hill immediately exiting transition ended up being a bit steeper than I anticipated and caused a couple issues with getting mounted. But eventually, I was on the bike and settling into my effort. The course had mostly good roads by SC standards and actually had more uphill than down since it ended at a higher elevation. With sticking to my plan I gradually grew my effort over the next couple hours of riding and looked for every way to keep a high speed while conserving energy for the run. I ended up averaging 25.5mph which is slightly faster than my speed in Augusta, despite a tougher course and being alone for 100% of the ride. 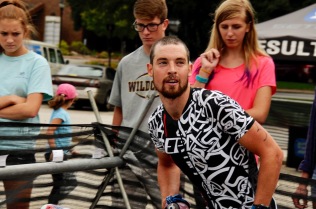 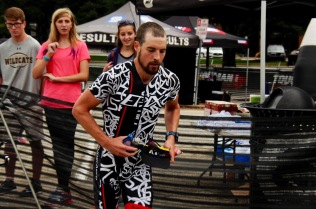 I entered the second transition in Uptown Greenwood with about a 10-minute lead and began the run in high spirits. I always feel fantastic at the beginning of the run, but I had promised Jesse (my coach) that I would begin very conservatively and stay at about a 6:20 min/mile pace for the first 4 miles. I succeeded in doing this and continued to feel good for the first out and back. The second half of the run is where I often start to feel the pain of racing for 3+ hours, but the easier effort in the earlier parts of the race enabled me to continue increasing my pace! 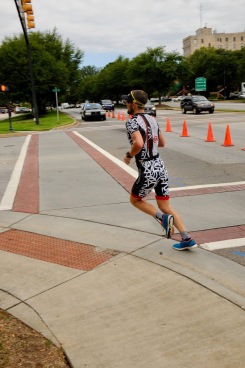 I started feeling more fatigue a little after mile 10, but seeing more of the athletes on the course was encouraging. I held about an even effort for the remainder with just a slight drop in pace in the last mile or two with the return being slightly more uphill.

I ended up crossing the line in 4 hours and a few seconds with a 19+ minute lead on second place Peter Kotland. I felt like a celebrity getting interviewed by Toughman after the race and loved having my parents and friends at the finish line! I spent the next few hours watching my friends finish their races and spinning out my legs with an easy bike ride. I knew many of the athletes competing including Pat and Julia Norcia (her first 70.3!), Cameron Dorn (burpee WR holder!), Tim Horan, Shawn Shealy, Matt Summey, Carlton Sink, Bob McKee, Katie Malone, Fiona Martin, Liz Blackwood, and many others. After getting everything broken down from the event, Rebekah and I went to grab dinner with the awesome SetUpEvents crew before finally returning home after a long day.

With only 2 weeks left until Ironman Louisville, the weekend wasn’t over as coach had a long ride on the plan for today. The legs didn’t feel too bad so I ended up getting just over 100 miles around Lake Murray and have just a few more hard workouts left before the big dance in Louisville! Thanks for reading and I hope everyone has as much fun training in the cool Fall weather as I do!

4 thoughts on “Toughman SC Half”