So this title actually has two meanings. I’ll start by saying that I have recently hired a coach. During my time out in Arizona, I met and raced with another Pro named Jesse Vondracek. Jesse has been in the sport a good bit longer than I have and has a ton of experience training and racing in Half and Full distance racing. What does this have to do with the title of this article? Well, he and Ben Hoffman not too long ago started their coaching company named Top Step Training. I’m confident that Jesse has the knowledge and experience to help prepare me to race at a higher level at the longer distances. My next goal races will be Augusta 70.3 followed by Ironman Louisville in mid-October. 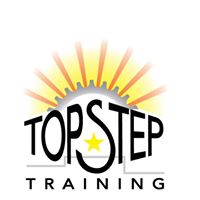 So back to the race earlier today! It had been a couple years since I last did the Greenville Sprint Tri, so I was excited to see how much I could improve. Ricky Flynn was also signed up to race, so it would be another showdown between the two of us from last week. I headed up to Greenville with my friend Daniel Baer for him to get a bike fit the day before the race and then we relaxed and slept at the Molzer household. I got to the race site with plenty of time to get prepared and warmed up for the race start at 7 am. 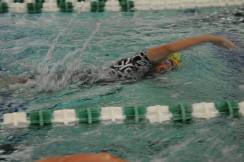 Ricky started first about 10 seconds ahead. Tom Clifford, the winner from the previous year, started about 5 seconds behind and I knew he could be very quick as well. After executing a decent swim in the pool, I exited the water and worked to make a quick transition. Once on the road, Tom passed me for a minute while I got my feet into my shoes. I quickly worked to make the pass back and then came by Ricky just a few minutes into the ride. I knew the remainder of the ride would be solo and simply came down to how much time I could put into the others to give a buffer heading into the run. Unlike last week at Lake Logan, my legs cooperated well and I was able to really push the pace. Although I was hurting bad from the effort, I knew I couldn’t let up for fear that I wouldn’t get large enough of a gap. I ended up coming into the second transition in the lead by about 2.5 minutes with an average speed on the bike of 26.4 mph.

I was pretty gassed getting off the bike and my legs for the run weren’t cooperating as well as they had the weekend before. My form felt bad, but I still fought to push hard since at that point I did not know how big of a lead I had created. After the first loop, I saw Ricky FLYING down the hill just over a minute behind. This gave me a bit more motivation to keep the effort high. I finally came down the last hill and was relieved when I didn’t see him coming. 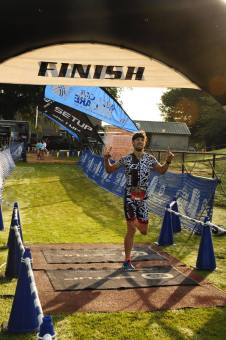 I ended up crossing the line in 56:07 and in 1st Overall with Ricky just over 40 seconds back. I’m very satisfied with this race, as I am finally getting my body back to being able to push and sustain hard efforts. This time is also nearly 4 minutes faster than my time a couple years ago with improvements in every split of the race showing that I have in no way peaked yet in this sport. This time also reset the Course Record again by nearly 2 minutes from the previous year. 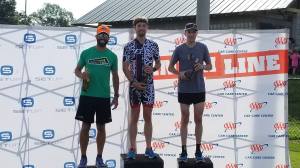 This race is an old one with tons of friends that show up with it being hugely popular in the Greenville area. Congrats to everyone that raced including Ross Germani, Peter Kotland, Jeff and Barbara Brandenburg, Shawn Shealy, Brad Fraedrich, Garrett Molzer, Lorand Batten, Joe Roof, Reid Thomas, Carlton Sink, Steve Erwin, “Willy” Stuck, Nick Foster, Katie Malone, Fiona Martin, Jen Kryzanowski, Leigh Green, Ilia Owens, Melinda Lindberg, Matt and Victoria Hammersmith, and everyone else out there! Soon I’ll be listing the entire participant list if I stay in this sport long enough!