The first triathlon of 2017! At least for me, that is. It had been nearly 5 months since my last triathlon which was the Miami 70.3 race in October (Austin 70.3 was technically only a bike/run). I have still been doing some racing between cycling or running (or both) since then, but I hadn’t gotten a chance yet to put it all together. Since then I have obviously made a lot of changes to my life and training and I have been excited to see if my improvements in practice would carry over to racing.

The race was Saturday morning so the plan was to drive up that Friday morning to figure out all the details of the race and make sure everything was in working order. The race is located in Lake Havasu, Arizona and hosted multiple different formats of triathlons. These races have actually been in existence for a number of years, but 2017 was the first year that came were under the umbrella of Toughman. I was driving up with friend and fellow Pro athlete Pedro Gomes for the race, who was also using this as an opportunity to shake off the cobwebs of not racing in awhile. Pedro is no stranger to the podium and has a long resume of success at Ironman and 70.3 racing, including being a 2-time Ironman Champion. You could say that he knows what he’s doing.

The 3-hour drive went smoothly and we spent the rest of the afternoon relaxing and attending the athlete briefing. This race was also hosting the Championship for the Mountain Collegiate Conference which was being held as an Olympic distance race. It was nice to see all of the Collegiate athletes getting excited to race each other and some of which were experiencing the sport for the first time. After an okay night of sleep (much earlier than I have been used to working evening shift) we were up and heading to the race site at around 5:30 am for our 7:10 am start time. I cut things a bit close with getting things set up, but I had just enough time for a few minutes of warming up in the water before we were lined up to start!

All of the men racing the Toughman Half started in the same wave and I had decided to line up next to my friend Paul Stevenson. I knew he was a good swimmer that I could likely use to pace off of without pushing too hard at the beginning of the race. I quickly slotted in next to or behind him for roughly the first half of the swim. Unfortunately, the sun was directly in our eyes making the buoys nearly impossible to see until we were within about 50-100 meters of them. This caused for a bit of confused swimming. As we made our turn back into the beach area, we began to overlap with some of the Olympic athletes doing their warm up. I am fairly certain that both of us may have swum over a lady at some point accidentally near the finish (sorry!). Soon enough, we were out of the water in somewhere around 19-20 minutes. The swim was definitely short in distance and was likely closer to 1500 meters than the typical 1900 meters. I still felt like I had held a good pace in what was a relatively comfortable effort level.

I came out of the first transition about 5-10 seconds behind Paul and quickly settled into a comfortable power zone resisting the urge to immediately chase. This course consisted of multiple loops on the bike allowing for many opportunities to assess where your competition is. As we came through a loop in a neighborhood I came by Paul and soon saw that I was about 1:20 down from Pedro and another athlete I didn’t know at the time (later identified as Pro Sam Holmes). I continued to sit right around 290 watts which felt comfortable with occasional surges for some very steep climbs on the course. I began to notice I was gaining about 5-10 seconds each time I saw Pedro and Sam which was encouraging. I came up behind them around mile 20 of the ride. I decided to sit back for a minute to take in some nutrition before pulling around to the front. After a few miles, Sam came back in front for a minute or two before I decided to throw in a surge to reassert the lead.

Over the next about 10 miles, I continued to maintain a comfortably hard pace with sporadic power surges on hills to attempt to break free of my chasers. Eventually, I noticed that Sam was no longer there but Pedro wasn’t budging. That’s when the mind games began. I knew that it was likely that any attempt I would make to pull away would likely be covered by Pedro and that it was very possible that he may want to take this down to the run. At this point, I decided to start conserving a bit of energy and maintained a comfortably high power for the rest of the ride with Pedro getting a good view of my backside for the remaining 20 miles.

As we came to the parking lot leading to transition I noticed a random wooden board about 3 feet wide in my way with some volunteers pointing at it.Since I was riding around 25 miles an hour and a bit occupied preparing for my dismount, I assumed they wanted me to avoid this board. As I did, I hit a metal strip (typically used for a gate) that caused my front tire to immediately lose all air pressure and go flat. My initial reaction was to try to coast it in the remaining 200 meters with a flat tire. This thought immediately went away as I almost slid out on my bike. Luckly, I already had my feet out of my shoes, and I quickly got off and began running my bike back to transition. Thus losing my lead on Pedro as he exited T2 probably about 10-15 seconds ahead of me. 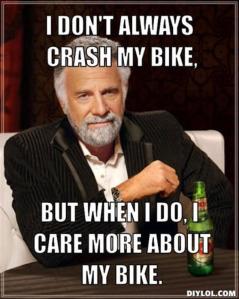 This episode obviously got my adrenaline going and I took off to regain the ground I had just lost, throwing a smart pacing plan out the window. I caught Pedro about half a mile into the run as we headed up a couple flights of stairs to the famous Lake Havasu London Bridge. I was feeling fantastic at the time and continued on at what felt like a comfortable pace. My watch had decided to mess up for the run portion of the race, but I was able to figure out that I passed the 3-mile mark at around 17 minutes, which equates to 5:40 min/miles. I knew this was ambitious but was hoping that my legs would hold up to the task. As the miles continued my muscles began to fatigue more and more and I could feel the pace dropping. I ensured to slow down at each aid station to take in fluids and throw cold water on myself as the temps were in the 80’s by this point. I came through mile 10 around 60 minutes which meant that my average pace had dropped to a 6 min/mile. This is still good for me but I knew that I was only going to get slower. My form began to deteriorate and I was really starting to regret forgetting to bring socks as I noticed a significant amount of blood on my shoes. A little bit into the 12th mile, Pedro came by me and I knew I didn’t have enough to battle him to the finish. I fought to maintain a decent pace and was probably down to about 7 min/miles at this point. Eventually, after about 13.5 miles (of course the run was long!) I made my way through the finish line in 2nd Overall, about 40 seconds behind Pedro and 8 minutes ahead of Sam.

While this race had a couple hiccups, I think overall it was a promising start to the season for me. My fitness is definitely improved and I’m comfortably holding paces that previously would have taken a good bit more effort for me. My nutrition strategy worked pretty well for me and I’ll likely only make a few tweaks for the next race. Having a smarter pacing strategy will obviously help in the future, but I do believe that with a lot of work, I will be able to hold those quicker paces throughout the entire race. Otherwise, small issues such as with flatting at the end of the ride, are bound to happen every once in awhile and I just need to be ready to react when they do.

I had fun talking with friends and meeting new people after the race and quickly found out the extent of my bleeding feet (it was bad). Overall this was a great trip and I’d recommend this race to anyone wanting to compete in a fun event without feeling like you are lost in a crowd of people. The scenery at Lake Havasu was gorgeous and was a really neat town to visit.

The weeks leading into the race I started looking into getting a new racing kit since mine from last year has obviously been heavily used. I wanted to try out some new brands and luckily an old friend from Epix Gear helped me out with an awesome looking suit! The kit was super comfortable and I came away with no chafing for the entire Half without dousing myself in lubricants. The only complaint is that Pedro said he was able to easily keep track of me with how bright the neon green colors were on my back! Maybe I need a camo suit in the future!

Next up is Oceanside 70.3 in California in only 2 weeks. This start list is stacked with literally the best Pro Triathletes in the world, including Jan Frodeno, Lionel Sanders, Andy Potts, and the list goes on. I’m excited to test my fitness against these giants of the sport and would be happy to get anywhere near these guys in a race like this. Thanks for reading!