Many of you likely know Harbison as the place with the shopping mall that gets terrible to drive around before the Christmas season (like right now). Some of you may know that hidden away just a couple miles from the shopping spree craziness there is a State Forest. It is quite simply known as “Harbison State Forest.” I do a good amount of my running there as there is an abundance of trails and I especially enjoy going there over the Fall/Winter season.

While there are a number of organized races that take place there over the year, there is one that is hard to put in the same category as the rest. Every Saturday there is a group of runners that meets at 7:00 am to run what is known as the “Outer Loop” at Harbison. This group is known as the “Harbison Trail Runners” and once a year they decide to make a certain Saturday (the Saturday before Thanksgiving) more special than the rest by doing TWO loops. Crazy stuff. Over the years this Saturday has become more and more popular and has been come to be known as “The Hairy Bison 15/30k.” (If you don’t understand the name, say Harbison over and over in your head until you do)

Over the past 2 years I have had various work conflicts that have prevented me from attempting to do both loops and earn the coveted title of Mr. Hairy Bison. This year was different as I ensured that my schedule was clear and that I was at least somewhat “fresh” for the race. After a short 10 mile bike ride to get to the forest, I got myself ready and spent some time socializing among the other forest dwellers. Before I knew it the very entertaining race briefing was taking place and (after the bison blew his horn) we were off!

I had two main goals for this race going in. Win the 15k, and win the 30k. Simple enough. I made my strategy similar to how I raced the 15k the previous year. Go out FAST by nailing the descents and see who could hang on. I took the lead from the very beginning and before too long it was myself and 2 others. While I would occasionally gain some distance on a downhill, they frequently closed it back as I took the uphills easier to keep the heart rate down. After about 5 to 6 miles of running it was clear that they were not dropping off at this pace so I decided to throw in the occasional surges to keep trying to break them. With about a mile to go there was 1 guy left directly behind me and I kept the pace hot all the way to the turn around.

I threw in one final surge in the last stretch to take first in the 15k and then stopped to down some of my drink that I left on my bike near the start. I knew that we both were tired from the first half and that next half would simply be who would fade less. I wasn’t about to go 18 miles without nutrition so I know it was a smart move. The second loop was the same as the first except that you reverse directions. This allows you to see all of the people finishing their first loop and is very different as not many people run the Outer Loop in this direction. I kept the pace a good bit slower for a couple miles as I navigated around people and hoped to build into my 2nd loop. I was also beginning to have a lot of stomach issues which frequently happens when the weather gets colder for me. I got frequent time and distance differentials to the guy who had passed me from other runners. I gathered that we were running a similar pace as he continued to be probably about 20 seconds or so ahead.

After a few miles of the 2nd loop my stomach issues continued to worsen but I feared that I might have to “do the deed”. At the aid station (Monty Python themed by the way) I was informed that I was the first runner to arrive. This was surprising but made sense after some of the comments others had made as I passed them going the other way. I knew that the guy in front of me must have taken a wrong turn at some point and could have been anywhere at that point. This wasn’t too surprising as none of the course is actually marked and is completely dependent on one knowing where to go by running it before. With so many years navigating Harbison and a couple recent runs to scout things out I knew the course extremely well. I suppose this wasn’t the same for him once he didn’t have me to follow.

After downing more fluids I suppressed my stomach issues and continued on. Not long after this my stomach started cooperating a bit more and my legs were also liking me a bit better. I had no idea how far back the next person was but I decided to just hold a reasonable pace without trying to push it too hard. The worst part of the last few miles was the chafing and getting pounced on by a dog which left a few scratches. Otherwise, I came skipping into the finish with energy to spare to be crowned Mr. Hairy Bison with a 30k Course Record of 2:02:02! 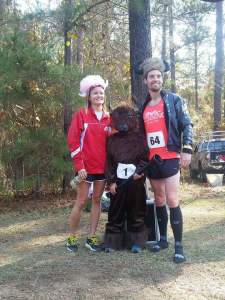 I had a ton of fun after watching friends finish and talking with friends that I don’t get to see as often. I got a great massage at the Fuse table they had there and shortly after was crowned Mr Hairy Bison with Linn Hall taking the Ms Hairy Bison crown. After the raffle it was time to ride home and take a much needed shower! Congrats to all the new and old friends that ran today as I know we all had a blast! Also congrats to roommate and friend Timothy Gibson who placed 2nd Overall at the Shandon Turkey Trot 8k this morning! 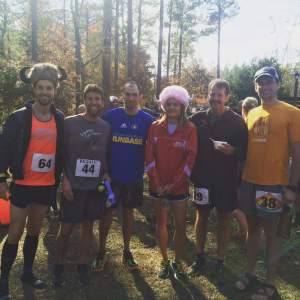 4 thoughts on “The Hairy Bison”