Now that I’ve had some time to reflect on my race in Austin, I think I can more accurately write a post of how the race panned out. Before that I will start with my recovery and lead up into Austin after the Miami 70.3 race the week before. The day after Miami involved essentially packing things up and seeing Rebekah off before flying out to Houston later in the day. I enjoyed my first Uber ride to the airport and was then picked up by my Uncle Greg whom I would be staying with for a few days before leaving for Austin. The next few days involved a few low intensity workouts mostly focusing on simply getting the blood flowing and working out some of the soreness from the race. The general fatigue lasted a few days but eventually began to wear off in the middle of the week.

On Thursday and Friday I joined in with the the Magnolia Masters swim group which meets in the Woodlands, TX. I had heard of them before as being proponents of USRPT swimming and took the opportunity to learn some from them. My swim still needs to improve a notch or two and over the off season I intend to address this in a few different ways. After the swim on Friday I headed to Austin with friend and fellow Team Kattouf athlete Mike Lambert (one of many people I was bumming rides off of). I was finally reunited with my bike and enjoyed a quick spin with one of the locals around Austin, TX. I was nervous about not having my bike for a few days initially but the guys at TriBike Transport took great care of my bike and it was in perfect condition when I picked it up that Friday. 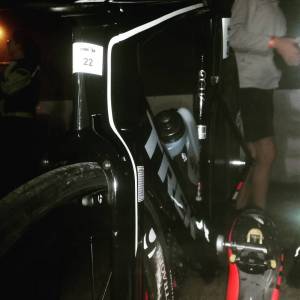 By Saturday everything was set up and ready for the race and my body finally felt ready for another round! I knew that this would be another stacked field of Pro athletes but was excited to put together a better performance than what I had in Miami. Race morning went smoothly despite having two separate transitions to set up. When we got to the swim start it was very foggy and difficult to see more than a couple hundred yards. The officials decided to delay the start to allow the sun to come up and for the fog to hopefully lift. This actually ended up making it worse as the sun simply illuminated the fog more and made it hard to see even past the first swim buoy only 100 yards out. After waiting around for about an hour, the officials made the call to cancel the swim and make the race a bike-run with a time trial start.

They had the Pro men starting one every 30 seconds and I did not have to wait long since I was Bib #22. Upon starting I immediately got up to speed and settled into my time trial position. I knew the cancelled swim would make for a lot of fast bike splits but I tried not to get too eager too early. I spent approximately the first 20 miles solo before putting in a small surge to catch 2 cyclists that were not far up the road. This was my first time actually riding with other cyclists in a Pro race and there was a huge difference! Over the next 40 miles or so I went from conserving energy behind other cyclists, putting in large surges to overtake 1 or 2 cyclists at a time, trying to break away, and trying not to get dropped. Between this and the hills on the bike course my power was fluctuating much more than it typically would in a race. In the last few miles of the bike my power and energy started to drop and I feared that I may have burnt a few too many matches while playing to the group dynamics. Regardless, I tried not to dig my hole any deeper and got to the next transition on a moderate effort. 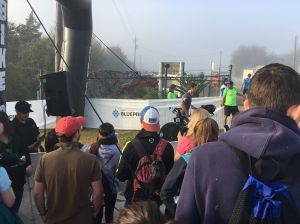 After a relatively slow transition I made my start to the run and noticed that there were 3 athletes in front of me within 30 seconds. My body was hurting but I toughed through it for the first mile in 5:56. I was gaining a small amount of ground, but not much and I was starting to enter into a world of hurt. Somewhere in the second mile I decided that my bladder was not going to make it 13.1 miles without using a port-o-john. I quickly ducked into one and spent what felt like an eternity in there. I quickly came out and soon found that my body was not feeling any better. I kept chugging away but over the next 11-12 miles my body and mind kept finding new and creative ways to torture me. At some points I was able to hold a good pace for a minute or two before being forced to a walk. I won’t list everything that went wrong, but if it could, then it probably did. I even ended up vomiting for the first time ever in training or racing at mile 11.

I finally made it to the finish line after a grueling 3 loops and was relieved it was over. I had fallen apart even worse than in Miami which I didn’t think was possible. I ended up 25th Male Pro which was technically better than Miami, but it sure didn’t feel like it. I waited for Mike to finish who ended up with a very respectable 20th place in his Age Group after only 3 months of coaching and his 2nd Half Ironman in the past couple years!

The next couple days had me feeling down about my performance and results, but I am now thinking positively again and am already looking forward to next season! These races were a hard hit for me but I’m already eager to let go of these races and dig deep into training so I can achieve the results I know I am capable of next year.

Also, since this post has so many negatives to it, I thought I should list a few things that went well just to balance it out!

Thanks to everyone that made these races possible! Especially my Uncle Greg and Aunt Carolyn for letting me stay with them and Mike and Josie for the great times in Austin!